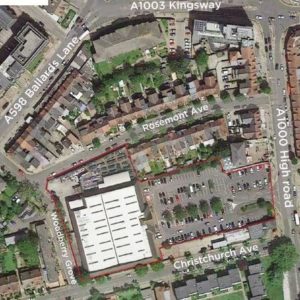 An appeal by developer Taylor Wimpey against the refusal to grant planning permission for 307 new homes on the former Homebase site in North Finchley has been dismissed.

In the current push across London for new housing at what sometimes seems like any cost this is a welcome decision. The Finchley Society had objected to the application along with more than 200 residents, and Councillors on the Strategic Planning Committee of the London Borough of Barnet unanimously rejected the scheme despite their Officers recommending approval. (details here)

The Finchley Society were granted Rule 6 status at the Appeal Inquiry, enabling them to take an active part in the proceedings of the week-long Inquiry held in July 2021. The Inspector concurred that the form, scale and massing proposed failed to integrate into its surroundings, and consequent harm to both the neighbourhood and the occupants of the new dwellings would result. The Inspector also noted that these points were raised at public consultation, but the developer failed to take any notice.

Under National Planning Policy there is a preference for development over quality where the housing targets for a Borough are not being met. In this instance though he judged Barnet was not reaching its 5-year target for housing supply the Inspector clearly felt that the harm caused by the proposal would outweigh the benefit of the additional units.

The Finchley Society and local residents accept that housing would be appropriate for the site, but it should be well designed and considerate of its neighbours.