Spike Milligan, author, poet, comedian, and creator of the famous “Goon show”, lived in Finchley, North London, from 1955 to 1974. He loved his surroundings: its open spaces, its often quaint architecture, and the brook that ran at the bottom of his garden. When a local amenity group, The Finchley Society, was set up in 1971, hewas one of the first to join. He became its President and later its Patron.

In 2004, a group of his friends and family combined with The Finchley Society to raise funds for the creation of a bronze statue to be sited at Avenue House in Finchley. The life-size statue by John Somerville shows Spike sitting on a bench and turning as if to speak to an imaginary person sharing the bench with him. Many people, young and old, will come to have their photo taken in this unique setting. 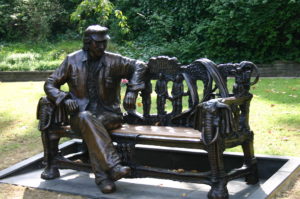 The statue, located in the Gardens of Stephens House, was unveiled in September 2014. Members of the Society, in particular Barbara Warren, David Smith, Carol Halls and Derek Warren, played a key role in raising funds to complete the statue. You can find out more about the campaign at the Spike Statue website.