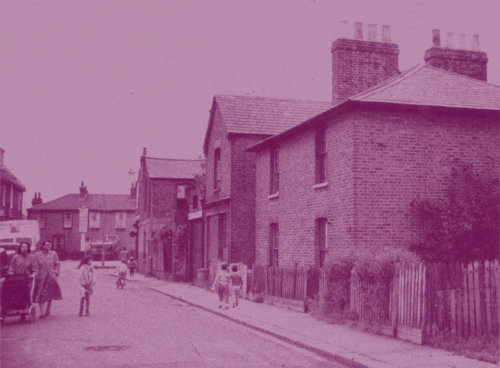 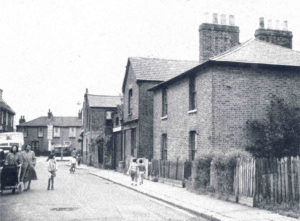 From our Archives:
Chapel Street in 1960

East Finchley only ever had two streets – King Street and Chapel Street; now it has one.

What we know as High Road East Finchley was built across the common in the 1300s to provide a route to the north; the common was enclosed in 1811. In 1830 a non-conformist chapel (enlarged in 1845) was constructed on the old common next to the road. A decision was made in 1853 to construct the first new road linking Market Place to the High Road and the chapel. It was named, appropriately enough, Chapel Street. After a fire, the Congregationalists moved to a new church on the corner of East End Road and the old chapel was sold, despite opposition, in 1895 for St Mary’s Roman Catholic church.

On the night of November 11, 1940, a German bomber destroyed much of the Market Place area including the church building. The Catholic church moved north to its current location. The damaged area and more was redeveloped in the 1960s.

A few white tiles in the High Road give a clue to the former whereabouts of the chapel.

The photo was taken in June 1960 by Mr. Pryor, landlord of the Alexandra Public House in Church Lane. The photo, taken prior to the demolition and redevelopment, looks west towards Market Place and the George pub.

The Society has several thousand photos, listed here. To learn more about our archives click here.