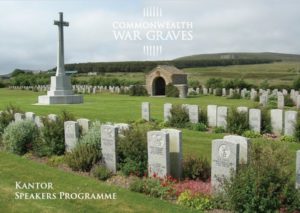 … online and
at Stephens House

This talk by Tim Bell explained the background and history of the Commonwealth War Graves Commission (CWGC), along with its protocols for commemoration. In his talk Tim also touched on horticulture, architecture and conservation, as they relate to the work of the CWGC, as well as the Commission’s current work and initiatives across the globe.

A resident of Finchley, Tim is a volunteer speaker with the CWGC. He volunteers so that the general public can learn more about the Commission, and hopefully engage with its efforts to broaden understanding and help perpetuate the memory of the men and women who sacrificed their lives in the two world wars. You can find out more about the Commonwealth War Graves Commission and the Commonwealth War Graves Foundation here  and here.

Tim has three relatives who died in in the First World War. His grandfather was wounded during the Battle of the Somme while serving with the 2nd Manchester Pals. This Battalion forms the heart of Tim’s interest in the Great War. He maintains a website on the Battalion and has written about it in a number of online publications, the latest of which concerns the almost 100 new war grave commemorations that are in hand for “The Forgotten Battalion of the Manchester Regiment”.

Online: The meeting also took place via Zoom. If you would like more information about our online meetings but are not a Member of the Finchley Society, please email us at zoom@finchleysociety.org.uk.

Note: You will find an internet calendar (ics) file here. You can use this file to add the January 27 meeting to your online calendar.